America’s Audit Has Drawn Out The “Electocrats” 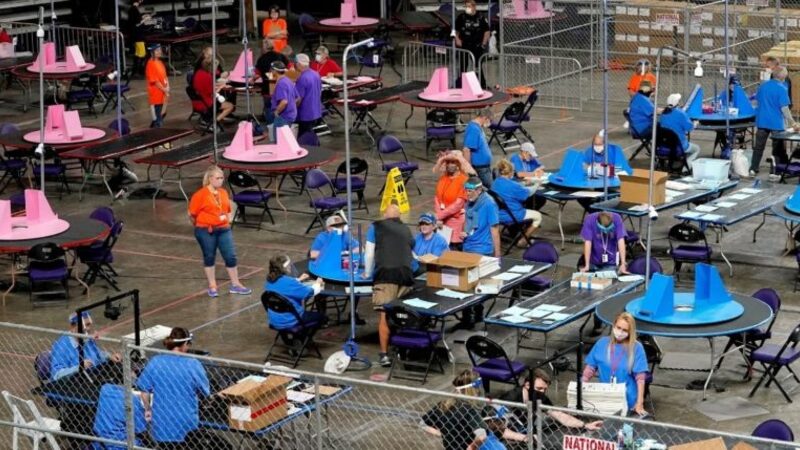 AZ Audit by N/A is licensed under N/A N/A
Recently, a clear pattern has emerged. When bureaucracies have their actions examined, they first declare themselves to be the experts. They then are deeply offended that anyone would question their authority. Then they proceed to marginalize anyone who continues to challenge them. The corporate media and Big Tech aids them in a smear and indignation campaign.

Prime examples include the corrupted wing of the intelligence and federal law enforcement communities circling the wagons on phony Russia collusion allegations. More recently, we’ve seen public health bureaucracies behaving in a similar fashion as it pertains to the Wuhan, China origins of the pandemic. Now we are finding the same pattern when it comes to election integrity and the Establishment that surrounds our elections industry. And it is just that, an industry.

Every general election in the United States is a complex undertaking and has been determined to require the work of public and private sector employees, contractors, and vendors. In a short period of time, a large amount of data is collected from people – the voters – who are almost entirely untrained in the ins and outs of election procedure. Anyone in the private sector who conducts a similar operation, one with a massive amount of interaction from outside entities, can tell you this almost always leads to a certain amount of issues.

It must be acknowledged that the 2020 election in the United States was unique. A larger number of votes were cast than ever before. Election rules and laws were changing on the fly, and procedures were fluctuating from day to day. Precincts, where voters had voted for years, were transformed into consolidated voting centers — millions, who had consistently voted in person, voted by mail for the very first time.

It seems like common sense that we would want to go back and examine how things went with all of those last-minute changes. But when the idea of a forensic audit was brought up, the pattern of the Establishment, in this case the Establishment surrounding our elections, went into overdrive.

Bureaucracies run elections in our nation. As mentioned, often when bureaucracies are questioned, they immediately assume a defensive, instead of collaborative, posture. They say nothing is wrong, and “no one else understands what we do but us.” If it turns out that the bureaucracies made mistakes, they seem to have the same tired answer, “It’s because you didn’t provide us with enough resources to do it right.” In other words, they want more money.

In Education, the know-it-alls that tell parents to “butt out” while they decide how to educate our children have been dubbed “Educrats.” Perhaps we should call those heading up our elections “Electocrats.” There is a tiny number of companies that even submit bids on election equipment to the various government election agencies. There is also a very small group that is considered “certified” to certify machines or conduct simple recounts – which are called “audits” (they are not true audits.) It is a tight cozy circle that receives many billions of dollars from taxpayer-funded contracts.

In 2020, one of the most complex elections in our nation’s history was conducted. It left many voters with questions. The indignation was immediate and intense. And, even still, a massive number of the American People want to know with the utmost certainty that their vote was counted the way they intended it to be.

In response to this genuine desire among the American People, the “Electocrats” predictably responded by calling them conspiracy theorists, and even went as far as to call their concerns an “assault on democracy.” How dare the voters try to enter the Electocrats’ “sacred circle” by calling for a full forensic audit of the vote – which had never been done before. The full forensic audit of the Maricopa County 2020 General Election, commissioned by the Arizona State Senate, has had a bullseye painted on its back by the Electocrats from the start.

Early on, the Electocrats refused to cooperate with the Arizona State Senate and the People. Even as they were formally subjected to the full forensic audit, they broke protocol that is followed by private sector. In the private sector, it is fairly standard for the audited entity to be available to answer simple questions. Instead, most on the Maricopa County Board of Supervisors, and the newly elected County Recorder, decided to shut all doors of communication and rely on the word of bureaucrats with every incentive to tell him all was well.

The full forensic audit in Maricopa County has already shown that there were thousands of duplicated ballots without required serial numbers stamped on them. These duplicated ballots are made when an original ballot is damaged in some way sufficient to not be counted by the tabulation machines. It is only by having matching serial numbers on originals and duplicates that one can verify that duplicates accurately reflect the voters’ wishes.

Not having the serial numbers is a violation of Arizona State Statutes (A.R.S. section 16-621), and even the Arizona Elections Procedures Manual (p.202). The Procedures Manual was published by current Arizona Secretary of State Katie Hobbs, one of the harshest critics of what has come to be known as “America’s Audit.” She seems wholly unconcerned that State law and her own manual were violated, and has been defensive and antagonistic in her tone as she works against the will of the People. True to form, the mainstream media does not ask her about it. Elections are too important to leave up to the Electocrats, and America’s Audit is holding them accountable.

Dr. Kelli Ward is a family physician, two-term Arizona state senator, and the chairwoman of the Republican Party of Arizona. On Twitter: @KelliWardAZ