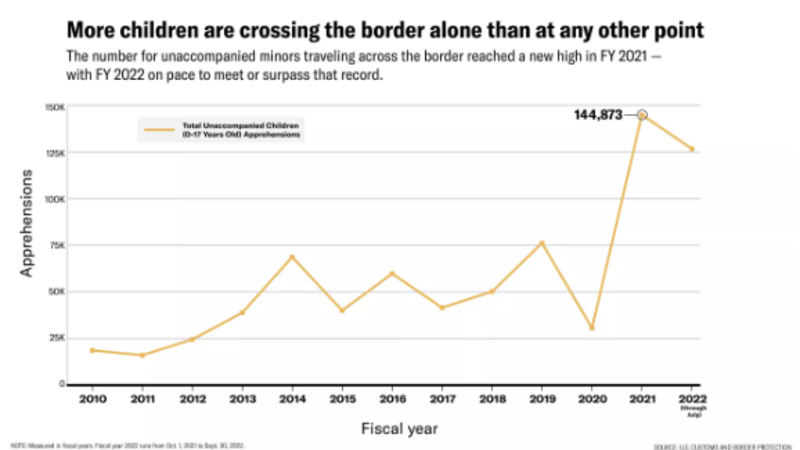 children crossing border stats by N/A is licensed under N/A N/A
More than a quarter of a million unaccompanied children have walked across the U.S.-Mexico border in President Joe Biden’s first year and a half in office — an unprecedented figure.

Eight in 10 children were released into the interior of the United States, prompting new challenges at the border and in communities nationwide.

“If anyone had any doubt about whether the chaos ensuing for the last 18 months at the Southwest border was a full-blown humanitarian crisis, they need only take one look at the staggering number of Unaccompanied Alien Children (UACs) who have crossed the border illegally," said New York Rep. John Katko , the most senior Republican on the House Homeland Security Committee, in a statement to the Washington Examiner.

The initial surge of unaccompanied children to the border grabbed the nation’s attention in March 2021 as 18,700 children came across that month — more than all of 2010.

Under Biden, the federal government has averaged more than 10,000 children in federal holding facilities daily. Each day, another 250 to 600 children are apprehended at the border, typically facilitated by smugglers paid by the family.

"Incentivized by President Biden’s weak, open border policies, children are being sent on a traumatic journey exposed to the elements and placed in unimaginable danger by human smugglers who don’t see a person, but, rather, only dollar signs," Katko added.

In all, 262,756 minor children crossed the border alone since February 2021 — Biden's first full month in the Oval Office. Of those, 40,319 were Mexican and would have automatically been returned south under a 2008 trafficking law that protects children from removal when they are from countries other than Canada and Mexico, leaving about 85% of remaining children detained and discharged into the U.S. to adults, according to Border Patrol data.
The trend of unaccompanied minors crossing the southern border began in the early 2010s. The Obama administration faced record-high child arrivals in 2014 as more than 68,000 children were apprehended.

The numbers then dropped for several years, but in February 2021, Biden instructed officials not to turn away children who came over the border alone — as had been the policy during the pandemic. Children from noncontiguous countries would be taken into custody on the basis that they may be trafficking victims and protected from removal by a 2008 federal law.

"Perceptions that Biden is more welcoming than his predecessor have also driven migration, some observers say," Council on Foreign Relations researchers Amelia Cheatham and Diana Roy wrote in a report published last December. "Many children hope to reunite with relatives in the United States. Others have deliberately left their families behind, fleeing domestic abuse, criminal gangs, or local corruption. Some migrant parents send their children across the border alone to avail themselves of asylum protections for unaccompanied minors."

Children who cross the border are taken into custody by Border Patrol agents for processing and then transferred to the Department of Health and Human Services for care by its Office of Refugee Resettlement. The government houses children for roughly 30 days as it searches for a suitable adult in the U.S. who can care for the child.

Within weeks of Biden’s decision not to turn away children, the government found itself with nearly 20,000 children in its custody, including more than 5,500 in Border Patrol's jail-like cells. The government procured emergency facilities to hold children through September and believed the surge of children would drop by then.

Theresa Cardinal Brown, managing director for immigration and cross-border policy at the Bipartisan Policy Center in Washington, told the Washington Examiner last August that the Biden administration’s top goal was to "get kids out of" Border Patrol facilities.

HHS and its contractors opened a dozen temporary facilities nationwide to accept children from Border Patrol. It awarded a $530 million no-bid contract to Endeavors, an organization with no prior experience housing immigrants that quickly came under scrutiny for unlivable conditions. At its Pecos site in West Texas, children were detained for up to three months in "cage-like rooms," got sick from undercooked food, and rarely saw the light of day,  according to immigrant advocacy group RAICES.

Since then, the Biden administration signed a $177 million five-year deal to rent out an upscale boarding school campus in Greensboro, North Carolina, to house up to 1,000 children in HHS custody. Pecos is still operating in Texas.

Of the 137,697 unaccompanied minors apprehended at the southern border by Border Patrol since last October, HHS has released 107,000 to sponsors nationwide as of July 31, including 16,000 in Texas, federal data show.

Children released to sponsors are expected to enroll in public schools, but the government is not obligated to notify local districts to expect a child. Schools must accommodate any child who shows up, and they do so, according to Noelle Ellerson Ng, associate executive director for advocacy and governance at the School Superintendents Association.

"Is it easy or effective? No," Ellerson Ng told the Washington Examiner in an interview earlier this year. "And particularly if you're serving a child or population that comes in with needs."
Source: https://www.washingtonexaminer.com/restoring-america/faith-freedom-self-reliance/broken-border-unaccompanied-migrant-children-humanitarian-crisis-levels
children crossing border stats by N/A is licensed under N/A N/A